Welcome back to another episode of DUELING DIY! (DUN duh DUNNNNNNNNNNNN!!!!!!)

As I mentioned last week, I waffle between going chronologically with these posts and just jumping in with where things are TO.DAY.

Mostly because I actually did stuff to the kitchen last week. (Look at me go.)

So. Where were we? 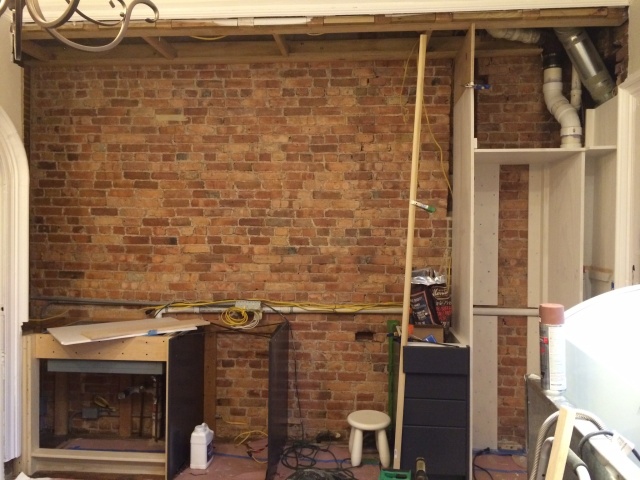 Ah yes. The kitchen was mostly looking like that.

For such a massive project, I find it’s helpful to break it down into smaller chunks. Focus on those. Then move on.

Right now the goal is to get all the base cabinets in so that the counters can be templated.

While I enjoy the giant size of the “sink” I’ve been using, having it so low to the ground is rough on my back.

Before I left for India, I had 3 main sections of base cabinets left to do – the sink cabinet, the base cabinet going to the left of the mantel, and the island.

Sink Cab
This “cabinet” was mostly built. I just needed to put the doors on and build some stiles for the tilt out trays. Ahhh fun words like ‘mostly’ and ‘just’. They seem so simple. Straightforward. Easy. Quick.

I use “cabinet” because we didn’t build this sink cab like normal people would build a sink cabinet. Or any other cabinet for that matter.

We’ll come back to how this sucker got built another day but here’s some pics from this past week.

Because the “cabinet” isn’t stock, there aren’t those handy pre-drilled, “put the hinges here and it will all line up perfectly” holes. This is how I manage.

Luckily, IKEA hinges can be adjusted in all 3 dimensions. It’s my saving grace when things aren’t dead-on accurate. (Which is most of the time.)

Once the doors were fitted, I needed to make stiles for the upper fronts.

A bit of poplar later –

And a couple days of priming & painting the pieces.

Since templating is on my mind, I needed to get cracking on the last 2 sections of base cabs. Only problem is – I hadn’t actually bought them. Which is how I found myself braving the swarms at IKEA mid-afternoon on a Saturday.

I was in & out in 2 hours. Considering the Elizabeth IKEA is basically hell on earth on Saturdays but especially in the afternoons, I’m feeling pretty good about my IKEA skills. The thing I always forget though a little is how much STUFF 4 cabinets equals. 4 cabinets (3 base & 1 upper) came out to 45 pieces and 433lbs.

If the snow wasn’t there, I would have just driven up on the sidewalk. But this cut it down a little.

Sunday was a whole mess of base cabinet back & forth.

I had measured. I knew it would come out past the window. I didn’t realize how much of a bad idea that was until things were assembled.

After a good sized pity party and more space planning, I decided to ditch the drawers and do shelves in this cabinet instead. Which meant cutting it down even more wouldn’t be a problem.

But things are moving! And that’s all that matters, right? RIGHT?!

Sarah’s been sick with the flu and she’s still kicking my butt. Tell her to send those kitchen elves over here. Mama needs some running water already.