Nearly every day someone asks, “How’s the kitchen??”

“It’s getting there,” is my stock reply.

Because it is.
Slowly.
Surely.

Sometimes in fits and spurts. Sometimes at a snails pace. But it is getting there.

The past 2 weeks have been full of planning and projects and doing for things other than the kitchen. Renovations to repair the damage caused by the fire have yet to commence but are on the immediate horizon. The perfect skylight seems to be the current speed bump. A blessing and a curse. It would be lovely to have everything done already but I also don’t hate the delay.

When the skylight is resolved, the roof and getting the home’s envelope watertight will be top priority. Repairs will then move inside. With that will likely come the overwhelming process of packing out the entire house and moving everything into storage.

The floors need to be refinished and they right through every room of the house (minus the 2 bathrooms). The only way to refinish the foyer, hallways, and stairs is to refinish the E.N.T.I.R.E. house. The thought of it makes me want to curl under the covers and take a nap.

This past weekend we packed up all sorts of stuff to take to a neighborhood yard sale. Not my neighborhood. A cute suburban neighborhood where there are driveways and grass. Yard sales aren’t usually my thing. Hosting & selling, that is. Buying is fun. But I didn’t have to plan or do much of anything to coordinate this. 4 truckloads of furniture and junk were unloaded in said unsuspecting driveway. $167 was made before hauling what didn’t sell off to the thrift store.

I’m still not sure it’s worth the effort. I might have paid someone $167 to come cart all of this stuff out of the house and away. But there were friends and food and general merriment. A 70lb pig was roasted, beverages were drank, and soccer games were watched.

While I mercifully avoided the drama it took to get the pig actually on the fire, we did get roped into building the pit. Which is how I found myself at 9:50pm with this guy buying 3 dozen cinder blocks from Big Orange. 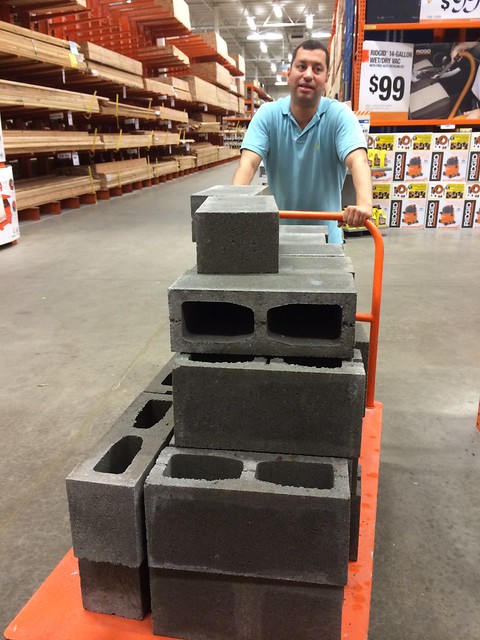 I can take no credit for doing anything other than hauling 936lbs of molded concrete around multiple times but the pig was pretty delicious. 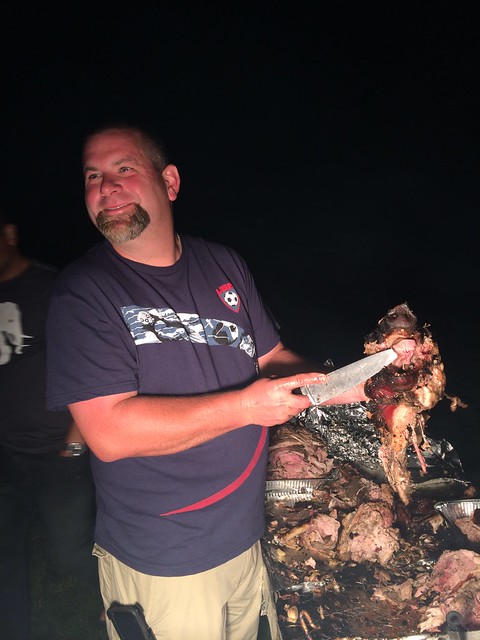 All this to say – my Friday night and all of Saturday were completely shot. $167 was made! But 0% of that had anything to do with the kitchen.

And then came Sunday. Father’s Day. A day of rest for weary father’s everywhere.

Who came to my house and hooked up the range hood. 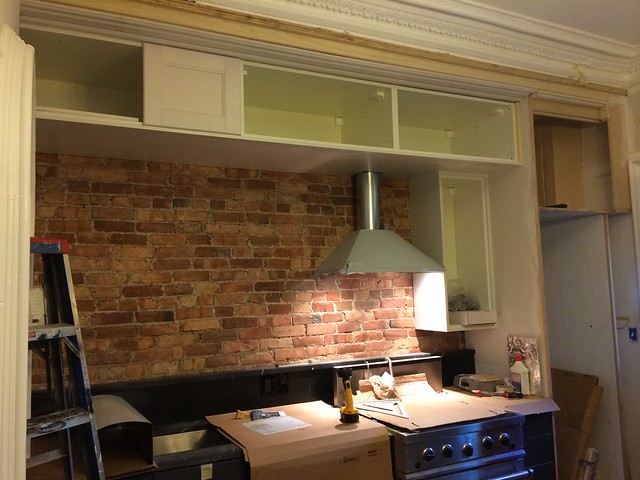 That is love, folks.

2 weeks ago, you saw that it had been hung on the wall. 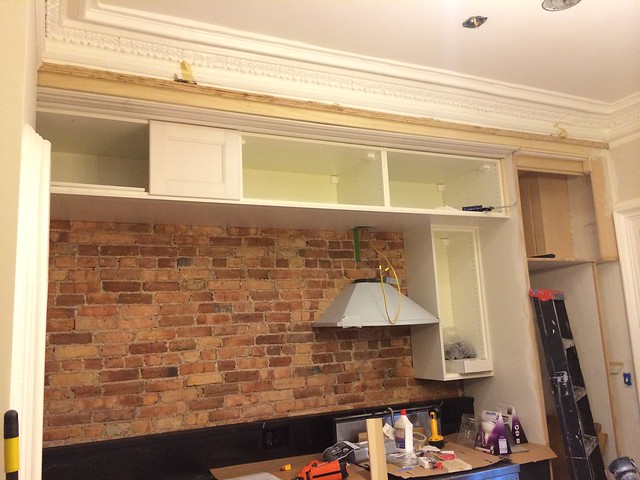 It had to come back down to actually install the duct work though. Which Dad did. Single-handily. While Mom & I were upstairs talking about how much shit I have that will need to get sorted and moved if this whole “packing out” thing becomes a reality.

I did help hold it in place while he screwed it back into the wall. 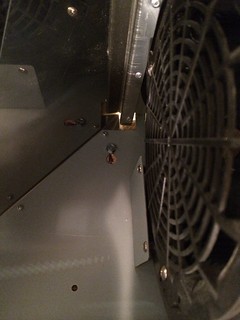 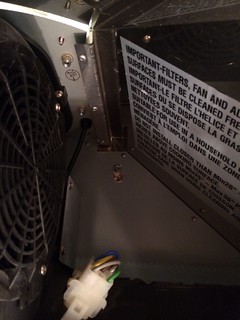 And then I took pictures. Like I did something. HA. 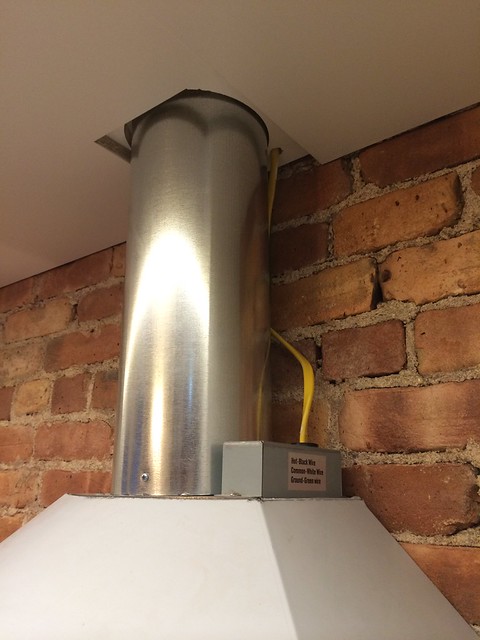 Electric is even hooked up! 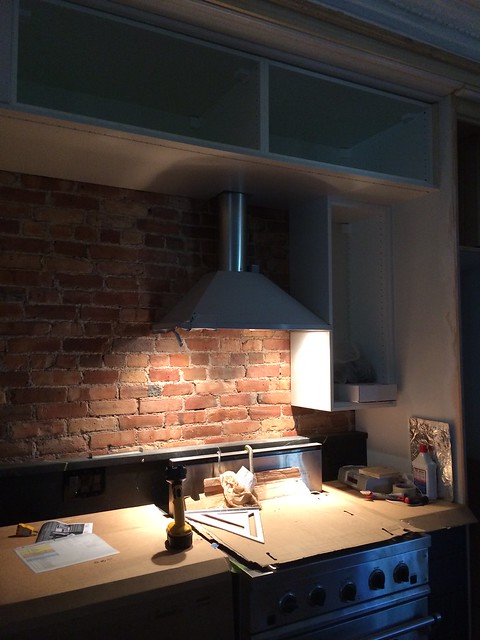 I could use it! If the stove was installed. Which it’s not. 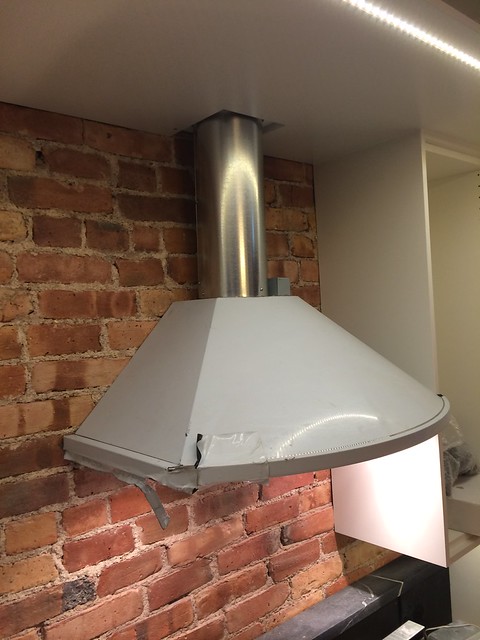 The duct cover needs to be cut down a bit. It’s a bit taller than will fit, height-wise, here. But other than that, the hood is in!

THANKS, DAD!! It really is getting there. Happy Father’s Day!

So Sarah’s like basically done, right? What are you guys up to? Making progress???